This coast of long white beaches, great surf and mangrove lagoons has been largely off the tourist routes during civil unrest. Now is the time to visit – no crowds and a particularly warm welcome by local people wanting to re-establish tourism. May to September is the time to go for the weather, activities and general up keep of the beach cleanliness.

Trincomalee and the Cultural Triangle can easily be combined to offer a wide range of holiday interests.

Arugam lies on an elephant corridor – feeding on the beru grass. This tiny fishing village is fast becoming the young and trendy hideout with the best surf in Sri Lanka and some would say, SE Asia. German kite surfing companies and enthusiasts take courses to learn this new extreme sport. With a wide sweeping beach it is good for swimming virtually year round. For surfing April to September will see the “surfers “ arrive tanned and eager- June 2004 saw the national championships here. The surfing is followed by the fishing season. “Stardust” is a lively and prestigious guesthouse whilst if you fancy watching from afar, hide away in a family beach hut, Kudakalliya.

Known as Trinco, to the locals, it is one of the World’s best deep harbours and the reason why many Sri Lankans speak English. Following settlement by the Portugese, then the Dutch, the British ousted them both and colonized Ceylon. As the East was home to the Tamil Tigers, the British Peacekeeping force took residency in 1940’s at Orrs Hill. With spectacular views of the harbour, the Headoffice has now been converted into the Welcombe Hotel.

Trinco, is now an amalgam of naval and military post, thriving market, economic centre and wonderful beaches and diving. The better beaches are 20 minutes North in Nilaveli.

Trinco has a historical fort and is well worth a meander. As you reach the penninusular you will see Swarmi Rock dropping 130 m into Bay of Bengal. Locally known as Lover’s Leap due to historic legend that a Dutch official’s daughter threw herself off after watching her unfaithful husband desert her by sea.

Also at the peak sits the important temple Koneswaram Kovil, replaced after the Portugese pushed the original into the sea in 1624. Many pilgrims from Jaffna visit this holy site and drive evil spirits away through smashing coconuts followed by prayers in the temple.

Many divers chose this area to see old temple relics but make sure that you check the conditions as during July, large numbers of Portugese man-of-war drift to the shore and may become stranded. The sting is serious.

Perhaps the best beaches of the East Coast and excellent conditions for diving and snorkeling. Just off shore lies Pigeon Island which has superb coves home to the Blue Rock pigeon and a shaley beach for sunbathers looking to escape for the day. At weekends the island is noisy and full of locals partying.

Lotus Park and Nilaveli Beach Garden are two relaxed guesthouses on the beach and close to dive Centres. 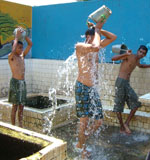 Nilaveli is surrounded by Asylum center for the homeless. Despite their poverty, the communities are extremely friendly and many will wave as they work in the local farms and tobacco fields.

The hot springs at Kanniyai are just 8km away and known for their therapeutic properties. There is some controversy as to their Hindu origin but the 7 natural hot spring wells each have a different temperature. Not for swimmers but be sure to get wet !

Jaffna has had a troubled history, from the Portugese invasion in 16th Century, the Dutch domination in 17th Century, the British in 18th Century and recently the Tamil fighting.

Though peaceful, there is still a military presence here so be prepared for the odd road block. The local people are well educated, speak good English, extremely hard working and many are very wealthy (aided through family members who escaped to England in the 1960’s/70’s.

This region is largely dry, until the monsoon rains falling from October to January bring the countryside back to life. The rich agriculture- potatoes, onions, mangoes, chillies - is aided by irrigation and becoming commercially successful once more.

The shallow lagoons around the peninsula host an abundance of bird life.

Jaffna is once again becoming a lively town seen in the busy bazaar. This is your chance to buy gorgeous saris from India and 22ct gold. Sadly Jaffna has been stripped of its wonderful architecture and antiques but the occasional temple door and ballistrade will take you into “another world”.

The hotel industry is still very underdeveloped and we have discovered nothing worthy of recommendation. Investment is in place and we will keep you informed. Those wishing to venture into Jaffna, and we would recommend a visit, should be prepared to accept very basic guesthouses (see Lonely planet guide) at extremely low rates.

Jaffna Fort was built in 1680 by the Dutch, is star-shaped and surrounded by a moat. It is now a military no-go area so you cannot inspect the house on the outer wall which was home to Virginia Woolf’s husband for sometime. Give it a few years, and the government will recognize the commercial value of letting visitors through.

Nallur Kandaswarmy Kovil is a largely Hindu area and many temples are characterized by vertical red and white stripes on the outer walls. The beautiful large and airy complex has shrines to several deities. Men should note that shirts and shoes should be removed before entering.